What Does The Death Of Cursive Mean?

As someone who dreaded Penmanship class, and who always–and I mean always–got poor grades in it, let me just say if writing in cursive  goes away I’ll be right up there in front mourning the loss.  (Cursive:  flowing letters all connected to make one word.  What we used to call “handwriting”.)

We learned the Palmer Method in grade school, where every letter had to follow a pattern and fit between the lines, and where loops and curlicues had to loop and curl, but not too little or too much.  Just right.

So much pressure!  I choked.  I couldn’t do it.

But some time after the 6th Grade, after penmanship was no longer required and I could relax, I realized that if I could barely read my own writing there was no chance that anyone else could, either.  I began looping and curling on my own, starting with row after row of connected capital S’s.  I spent hours over the course of many days looping and curling, not worrying about staying within the lines, and before long I found to my amazement that I was creating letters and then words that were actually legible.   It wasn’t exactly true Palmer Method–it was better.   It was a variation on the theme of Palmer and it was all me.

Maybe it’s because handwriting came so hard for me, I don’t know, but I’ve been taking the news of it’s imminent demise pretty hard.  I’ve noticed over the years that fewer and fewer people were actually writing in cursive and more and more were printing, but I had no idea there was an entire movement bent on killing off our lovely, traditional form of English handwriting.

In a USA Today article called “Is Cursive’s Day in Classroom Done?” I was shocked to read that 41 states do not require the teaching of cursive penmanship.  When did this happen?  To the casual observer it might seem obvious that cursive should go the way of the quill pen.  It takes up valuable class time to teach it, and, since the advent of the computer and digital keyboards, pecking has already taken over for block printing, which took over for cursive writing.

Nobody wants to actually write anything by hand anymore but when they have to they want it to take longer (In speed trials between cursive and printing, cursive wins, hands down) and look like the plain letters kindergartners use before they’re ready to try real handwriting.   I get that.

There are already young people out there who learned to read and write block print only and can’t read or write cursive.  That’s astounding, but apparently true.  When a witness in the George Zimmerman trial, a friend of Trayvon Martin’s, was handed documents written in cursive she was embarrassed to have to admit she couldn’t read them.

But in a Washington Post article, “Cursive is Disappearing from Public Schools”, there was this:

Deborah Spear, an academic therapist based in Great Falls, Virginia, said cursive writing is an integral part of her work with students who have dyslexia. Because all letters in cursive start on a base line, and because the pen moves fluidly from left to right, cursive is easier to learn for dyslexic students who have trouble forming words correctly.

Another side of it is that there is an art to writing in cursive.  With a stroke of the pen, we can set ourselves apart.  Whether our handwriting is beautifully executed or more akin to chicken-scratching, it’s all ours.  Nobody else can do it like we do.

I admit that I do most of my writing on a keyboard now.  It’s so much faster and ridiculously easy to correct.  It has become second nature to think and type at the same time.  I will even admit that electronic word processing has changed my life.   But when I want or need to write by hand, nothing is more satisfying than creating a visually satisfying sentence that couldn’t have been written by anyone but me.

But in that same WaPo article, here comes this guy:

Steve Graham, an education professor at Arizona State University and one of the top U.S. experts on handwriting instruction, said he has heard every argument for and against cursive.

“I have to tell you, I can’t remember the last time I read the Constitution,” Graham said. [in answer to the claim that if the teaching of cursive dies out there may come a day when people won’t be able to read the original manuscript of the constitution] “The truth is that cursive writing is pretty much gone, except in the adult world for people in their 60s and 70s.”

Well, that would be me, buddy, but I’m not such a stickler for traditional anachronisms that I want to keep this particular kind of handwriting around for old time’s sake.  (Though, of course, that’s a part of it.)  No, I want to keep it around because to kill it off severs one more part of us that is unique and individual and takes some effort.

We’ve done enough of that already. 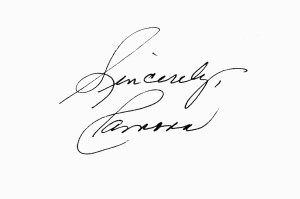 Update: My former friend Frank from the website “Frankly Curious” has taken issue with my piece here and has curiously chosen to take me down a peg or two. Over handwriting, of all things. It’s here. Give him a thrill. Read the damned thing.

6 Responses to What Does The Death Of Cursive Mean?