My grandson, the famous frog hunter, came up to visit this summer.  It took an entire week and a half, most of it spent being dropped in and lifted out of buckets, before our neighborhood frogs finally got smart and at least made an attempt to seek out Jonathan-proof hiding places.

Did it bother Jonathan that they were becoming harder to find?  That they were no longer just sitting in the grass, waiting for him to pick them up, but were, instead, hopping into the tall weeds or pretending to be one of the rocks on the shore?  Hardly.  When you’re a frog hunter the emphasis is on the hunt.  He knew he could only keep them for a while, anyway, before he had to let them go.

And he knew without a doubt that he would find them, no matter where they thought they could hide.

To the east, about 70 feet from our cabin, is “Frog Kingdom” and to the west, about a full city block away, is “Frog Heaven”. Armed with nothing more than a butterfly net and a minnow bucket, the mighty hunter set out, choosing his direction by the wind, the weather, and just good old 7-year-old instinct.

Before long, frogs and toads, from old and huge to young and tiny, were huddling in the grass at the bottom of the bucket.  He watched them intently while the rest of us crossed our fingers and held our breath, hoping the old ones wouldn’t take a notion to eat the tasty, young ones in front of our boy’s innocent little eyes. 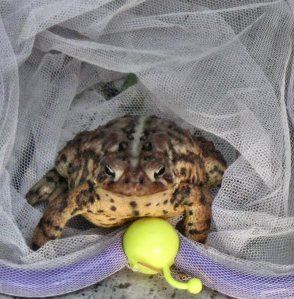 After a couple of hours of enjoying their company, it’s time to let them go.  Jonathan’s idea of real adventure–the Grand Finale–is to let the “Frog Kingdom” frogs loose in “Frog Heaven” territory and vice versa. Do they find their way back home? Of course they do. It’s the nature of things, according to the Book of Jon.

As I watched those hapless amphibians being caught and released over and over again, I got to thinking about the time I tried to save a suicidal frog.  No dying that day, no thanks to the frog, but I’ve often wondered whether that long-ago frog is now responsible for some of the progeny ending up in my grandson’s minnow bucket.

About that frog:  It was a warm, sunny, early spring day with a breeze off the lake that cried out for sheets to be drying on the line. I had just set my laundry basket down when I sensed something in the grass to my left. It was a big, green frog and I don’t know how I knew it was there, because it could have been a frog statue, still as a stone. It sat there with it’s head turned away from me the entire time I was hanging the sheets, and I thought that seemed mighty odd, considering I could be the enemy for all it knew.

“Go!” I whispered to that frog, but if it heard me, it didn’t acknowledge it. “Get out of here!” I said out loud, but it never twitched a muscle. I stomped my foot, and again–nothing.

Finally I turned my attention to the snake. I was not going to be a witness to this. No frog on my watch was going to commit suicide-by-snake. I had a long clothesline-prop nearby, and I reached for it, but then thought better of it. What if that snake crawled up the prop and got me before I could send it flying?

What to do, what to do? “Get out of here!” I yelled to the snake. But once again I might as well have been a thousand miles away. Neither of them were paying any attention to me. I was afraid to move, because I had it in my head that my presence was the only thing keeping that frog alive. If I moved in any direction–toward the frog, away from the frog–the snake would strike for sure. There were no rocks within reach, nothing to throw, so I yelled louder: “Come on you guys, stop this!”

My husband came around the corner to see what all the fuss was about, and, without a thought to his own safety, he calmly kicked the snake away from the grass and onto the beach, where it slithered into the water and went out of sight.

So what did the frog do? It looked at me as if to say, Fool!”, and hopped down to the beach in hot pursuit of it’s executioner.

The moral of this story is, when a frog wants to die it’s going to die, no matter what kind of intervention you desperately attempt.

Saving the world is a sorry, unappreciated business. Take your victories where you find them, and forget about the ingrates–amphibians included.